While Monitor Liability Managers, LLC’s IT Department was working hard on developing a new iPhone/mobile app for its producers, they wanted us to create a video that would promote the new mobile app, called MyMONITOR Mobile.

With about a month to produce the video, we mapped out an ambitious production schedule, including: pre-production meetings, graphic treatments and styleframes, voiceover auditions, musical scoring, post production, and final delivery. The goal was to finish production in time to display the video at an upcoming insurance industry conference.

After our pre-production meeting, we created a series of styleframes for the video from which the client could see the overall graphic layout. One of the main priorities of the promotional web video was to show how the mobile insurance app can be taken anywhere. So, we came up with the concept of showing rolling hills and the small MyMONITOR Mobile logos popping out of the hills. The birds in the background were also animated in the final web video production. One of the challenges during the shoot was keeping the iPhone steady to keep continuity of the placement of that cell phone between scenes. We came up with the idea of creating a device that would hold the iPhone in place, while someone was typing on it. In keeping with the mobile theme, we went with an upbeat musical track. We wanted the viewer to feel happy and upbeat about taking the mobile app anywhere. We held auditions for professional voiceover talent and provided the client with four finalists from which they picked their choice.

We completed production on time and within budget. Here’s the final video we produced:


In addition to the promotional video, we were also hired to create a step-by-step tutorial on how to use the app. We used the same professional voiceover for the production. The idea was to focus more attention on how to use the app and less on the graphics. We recorded the video segments at Monitor’s Rolling Meadows, Illinois campus.

Here is how the promotional video appeared on the company’s website: Monitor Liability Managers, LLC today announced the launch of MyMONITOR Mobile. This latest innovation allows producers to use their smartphones to get a quote, find underwriter contact information and access marketing materials.

“Monitor has always been committed to being a valuable resource for our producers. Now, MyMONITOR Mobile gives them the tools they need to conduct business whenever and wherever they want,” said Sandra C. Nelson, president. “We are proud to be a leader in this technology for accessing executive and professional liability insurance.”
MyMONITOR Mobile is available for AndroidTM, Blackberry® and iPhone® devices. Find it at www.monitorliability.com/mobile.html along with a full list of highlights and features.

Monitor Liability Managers, LLC + PLUS = An Equation for success

The video concept was to use mostly motion graphic elements, showing how the two organizations benefit each other. The treatment was to use an equation of ___ + ____ = ____. So, we came up with the chalkboard theme, where different scenes would reveal through the graphic animation. We provided styleframes to the client, which gave them an idea of how the graphics would be laid out on the screen.

We transitioned from scene to scene on the chalkboard through motion graphics and combined video segments that we filmed at the client’s Rolling Meadows, Illinois campus. We created a final logo animation, added music, chalkboard sound effects, dust, and delivered the video on time and within budget. The final video was shown at the conference to attendees and received rave reviews: 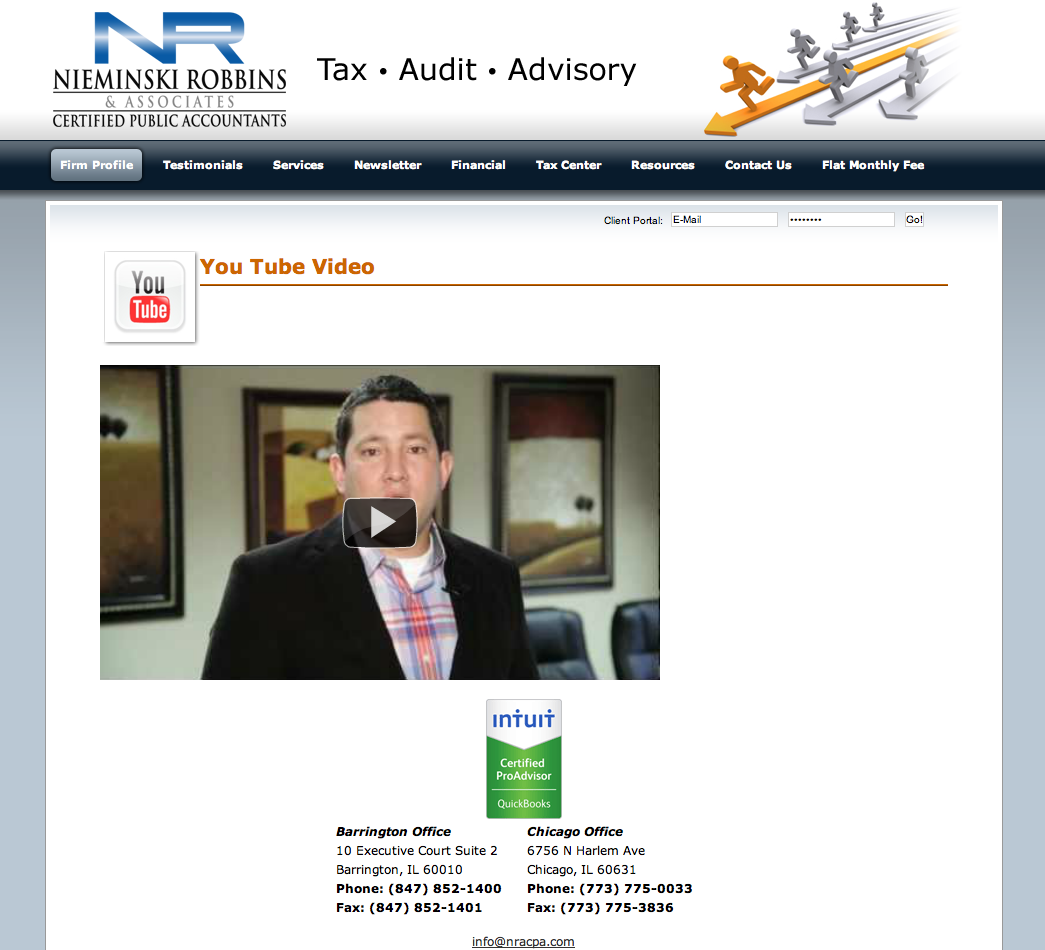 Nieminski Robbins & Associates is a full-service accountant with offices in Chicago and Barrington, Illinois. David Robbins, one of the firm’s partners, wanted to create a more personal experience for their website viewers. Beyond the traditional text and pictures, he wanted to personally welcome website visitors and give a brief synopsis about what visitors will find on the company’s website. Here is the video we produced for them:

Here is how the video appeared on their website: