Posted at h in Motion Design
Sounds Fantastic Entertainment provides disc jockey and entertainment services for weddings and special events around the Chicago area. The company wanted to give its website viewers a glimpse of what they can provide for various events. We filmed one of their DJs with our High Definition DSLR video camera and Steadicam/Glidecam at a Naperville wedding. We then edited all of the video footage and combined high-energy music with a motion graphics package that fit the video’s message.

The purpose of this video was to take existing video footage from one of Matt’s presentations and produce a highlight video, which would be shown to other groups who are interested in having Matt speak. We logged all of the footage and assembled all the soundbites. Then, we worked on the 2D animation template for a clean presentation. After we selected music and a few sound effects, we also created a 2D animation for Matt’s logo, which will now appear before all of his videos for consistent branding. From the moment I met with Marlene, the President of Barrington-based Aardvark Web Works, I knew that we’d be able to create a video that creatively explained her business to potential customers. Marlene is very creative and full of energy. So, I wanted to produce a video that matched her personality and the energy that fills the Aardvark Web Works’ office. While sitting in Marlene’s office, she showed me a drawing of an aardvark on the wall. That’s when I immediately knew the concept for her video.
My idea was to create a character animated video, which would be narrated by an aardvark. The aardvark would introduce viewers to a small business owner who had an outdated website. I liked the idea of using the aardvark as the “team leader” of aardvark web works. So, the idea was that he recruited a bunch of his friends and created Aardvark Web Works, a full-service web design company.

After scripting, the next step was to create a storyboard of the figures. Here’s a screen capture of one of the scenes: After approval of the storyboard, we added motion signals to each frame: From there, we added color and shading to the characters. Here are a few concepts we created: After that, we worked with a professional voiceover, added a music track, and added sound effects to the whole video. Andy the aardvark was born and Sandy the small business owner now has an updated website!

Here’s how the video appeared on their homepage: 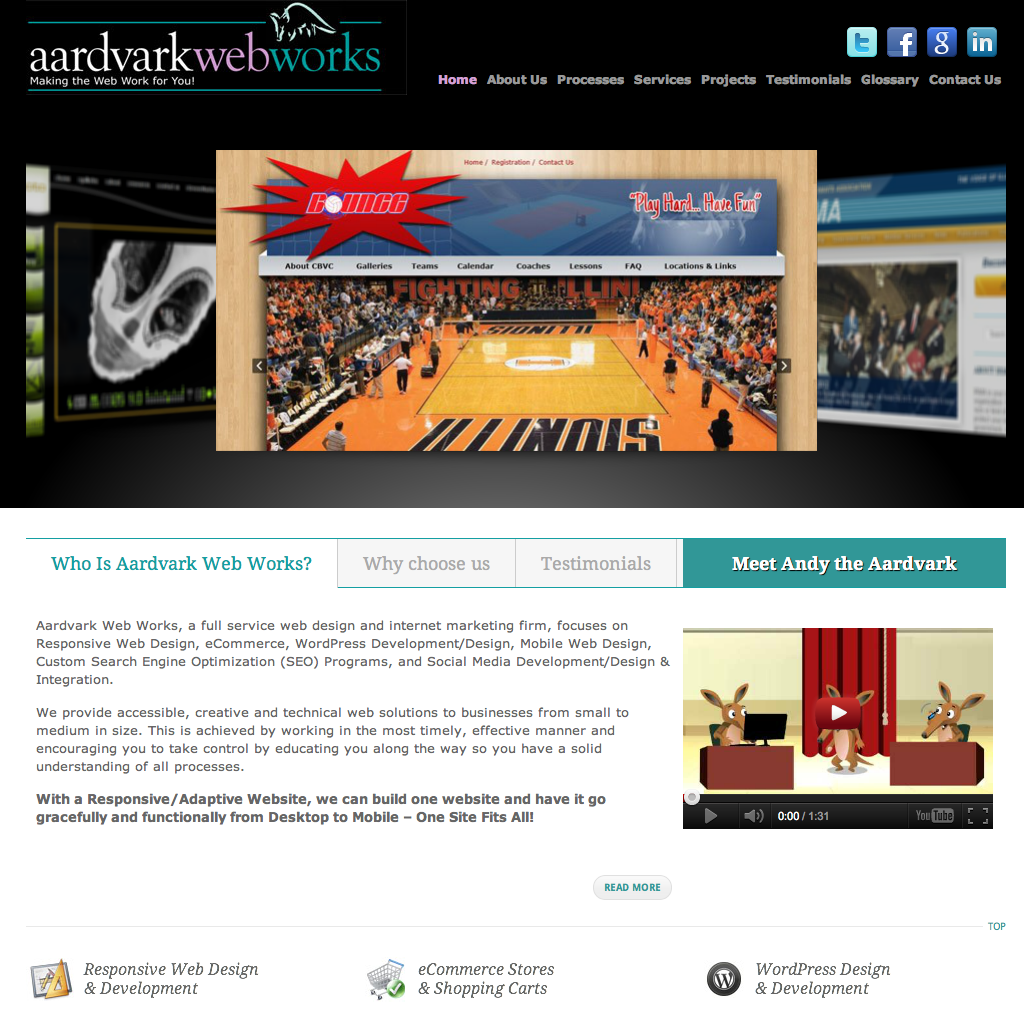 This video was also featured on the Barrington Area Library’s Business Blog! See the blog post by clicking here.
UPDATE: Marlene also gave a presentation in Barrington, Illinois about web trends and spoke to the group about the importance of web video. We captured a portion of her speech on an iPhone. In her own words, Marlene describes how big of an impact her new video has on her business: